The biggest INTERFORST of all times, boasting 75,000 square meters and 453 exhibitors (160 of whom from abroad) met with an exceptionally positive response from all participants. The exhibitors particularly praised the visitors’ high quality and professional expertise. The smooth organization of the trade show has also been very well received.

On the five days of the trade show, more than 50,000 trade visitors attended the event, approximately 1,000 more than in 2014. The foreign proportion leveled off again at 18 percent. All exhibitors agreed that the mood in the industry is excellent and the willingness to innovate high. The unusually strong presence of high-ranking politicians at INTERFORST 2018 was also perceived as very positive by the industry. This leads to the conclusion that INTERFORST as leading trade show is a firmly scheduled event for the majority of the exhibitors and reconfirms its significance as a showcase for innovations and key trade show for the timber and forestry sector.

Accordingly, Reinhard Pfeiffer, Deputy Managing Director of Messe München expressed his satisfaction: “INTERFORST 2018 has impressively shown that we are dealing with a cutting-edge high-tech industry. Digital solutions are gaining ground everywhere in the timber and forestry sector, and forestry enterprises can no longer be imagined without them. We, and above all our exhibitors, consider the fact that State Minister Michaela Kaniber spent such a lot of time at INTERFORST and that even Minister-President Markus Söder was among its guests as a sign of great appreciation for the industry.

Exhibition Director Martina Ehrnsperger was pleased that “INTERFORST has run so smoothly and there is great satisfaction among the majority of the exhibitors. We have received a lot of praise also for the setup during the run-up to the trade show. All this makes me look ahead with confidence to the next edition in 2022. I hope and trust that all exhibitors will then be present again!”

Ralf Dreeke, Managing Director, Wahlers Forsttechnik GmbH and Chairman of the INTERFORST Advisory Board, stated in representation of all exhibitors: “We are more than satisfied with the course of INTERFORST 2018. The visitors’ professional expertise and industry relevance were on a high level as usual. We are very pleased about the fact that many of our customers from northern and eastern Germany have come to Munich. The political support, the visit of the Bavarian forest owners within the framework of the centenary celebration and the strong reference to Austria due to the Country Day—all that was of great importance for us as exhibitors directly or indirectly. Also, the new space concept of the trade show convinced me after some initial skepticism. On the whole, the exhibition grounds are now perceived as being more open and attractive.”

A host of highlights, many political VIPs

INTERFORST has offered a particularly great number of highlights this year. Another impressive feature was the strong presence of political VIPs.

Digitalization has been the top issue

The dominating topic at INTERFORST 2018, both for the big machine manufacturers and at the Congress, forums and special shows, was ongoing digitalization in the forest. Harvesters, for example, which record data and import them into the accounting system autonomously, were on display. Or drones providing an overview of the tree population in the forest, of windthrows and pests. Other important subjects were forest management in harmony with nature with an emphasis on soil conservation as well as the traditional topic of health and safety at work.

During the implementation of its comprehensive supporting program, INTERFORST was supported by a great number of trusted partners again. The thematic and spatial intermeshing of the Congress, forums and special show in Hall B6 was deemed extremely successful and therefore earned great feedback from the visitors. The special show “From seedling to squared timber—timber processing chain” mapped the entire value added chain, ranging from seeding to the final product. This special show was implemented by the Board of Trustees for Forestry Work and Technology (KWF) in collaboration with the German Statutory Accident Insurance and the Producer Community for Quality Forest Plants of Southern Germany [Erzeugergemeinschaft für Qualitätsforstpflanzen Süddeutschland—EZG]. The RWTH Aachen University and the Technical University of Munich provided support in connection with the topic of forestry 4.0.

In its special show “On a large and small scale—using technology to improve security”, the German Social Insurance for Agriculture, Forestry and Horticulture [Sozialversicherung für Landwirtschaft, Forsten und Gartenbau—SVLFG] placed a particular focus on safety at work and health aspects when using technical tools.

The Scientific Congress dealt with the topics of climate change and the use of wood, digitalization and bioeconomy this time. Besides timber harvesting and health and safety at work, forestry 4.0 was one of the major topics of the lectures held at the forums of INTERFORST.

Noise and action are part of INTERFORST by tradition. In this respect, the Bavarian Logging Championship, the STIHL TIMBERSPORTS® Shows and, for the first time this year, the firewood processor comparative test by the German Agricultural Publishing House [Deutscher Landwirtschaftsverlag] proved to be “eye-catchers”. 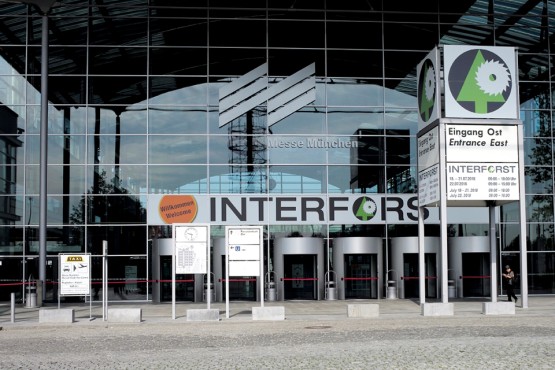