The ifo Institute surveys the indirect profitability of trade fairs and congresses at the Munich location on behalf of Messe München. It has risen by 25 percent since the last study.

“The latest study by ifo on indirect profitability demonstrates Messe München’s importance as an economic factor for the city, Bavaria and the federal government. Each euro made by Messe München (MMG) induces ten euros of revenue nationwide: in hotels and restaurants, at trade-fair construction companies, taxi companies, transport operators and cleaning, security and handicraft firms,” emphasizes Klaus Dittrich, CEO of Messe München.

As part of its latest study, the ifo Institute for Economic Research looked at the direct and indirect knock-on effects of trade fairs and congresses in Munich for the fourth time in 2019. It identified the revenue and taxes that were generated and calculated the number of gainfully employed persons dependent on trade fair and congress business. The period reviewed was from 2016 to 2019. The study’s results relate to one year of events with an average trade fair program. Exhibitors at and visitors to trade fairs and congresses in Munich induce average total revenue of EUR 3.29 billion a year throughout Germany. Around 80 percent of these purchasing power effects are in Munich (EUR 1.77 billion) and Bavaria (EUR 0.83 billion, excluding Munich). Compared to the last ifo study from 2013 (EUR 2.63 billion), the revenue induced nationwide rose by 25 percent. The revenue induced for Munich alone even increased by 28 percent. “That is attributable to the increase in the international spread of visitors and exhibitors, who stay longer and spend more on catering and shopping, especially in Munich,” says Horst Penzkofer from the ifo Institute, who was in charge of the study.

Trade fairs and congresses increase tax revenues by over 30 percent

That increase is also accompanied by higher tax revenues. The tax revenues induced in the whole of Germany were EUR 646 million, an increase of 32 percent since the 2013 study (EUR 490 million). That figure is even 38 percent for Munich alone. Under tax law, most of the taxes go to central government and the other federal states (EUR 396 million), while EUR 217 million remain in Bavaria and EUR 33 million in Munich.

As an organizer of trade fairs and congresses, Messe München GmbH has been hit directly and hard by the coronavirus pandemic. No events have been held since March. “At the moment we expect to lose up to EUR 230 million in revenue in 2020,” says Klaus Dittrich. “Unfortunately, the 1:10 formula also applies negatively the other way round, i.e. the economy as a whole will lose up to EUR 2.3 billion solely as a result of the events in Munich being canceled.”

Messe München therefore expressly welcomes the signal from the Bavarian government that, in principle, trade fairs will be allowed again in Bavaria starting from September 1. “The study’s results are impressive testimony to the importance of our events for the domestic economy. A restart in the fall will not only give exhibiting and visiting companies the growth boost they urgently need, but will also impart a significant stimulus to economic activity in the entire region.” 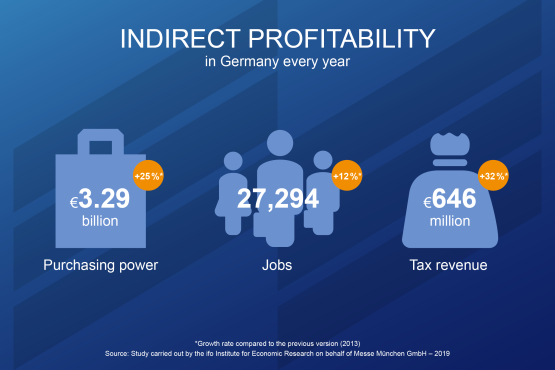