Press release : Hubert Aiwanger is Messe München's New Chairman of the Supervisory Board

Hubert Aiwanger, Bavarian Minister of State for Economic Affairs, Regional Development and Energy, is the new Chairman of the Supervisory Board of Messe München. He assumes chairmanship for the 2020 to 2022 parliamentary term and will take over from the previous chairman, Munich Lord Mayor Dieter Reiter, in regular rotation. Reiter will now be the First Vice Chairman. Other vice chairpersons are Franz Xaver Peteranderl, President of the Chamber of Crafts for Munich and Upper Bavaria, and Ulrike Bauer, Chairwoman of the Works Council.

“Messe München plays a central role for Bavaria as a business location. The very positive business figures in recent years demonstrate the outstanding strategic orientation. The company is one of the pioneers in its industry, particularly with a view to internationalization and digitalization. I am very much looking forward to a successful collaboration with the management board,” says Aiwanger.

And Klaus Dittrich, Chairman and CEO of Messe München, comments: “I am very pleased to see Hubert Aiwanger at the head of our Supervisory Board as a dependable and competent partner in all matters relating to the expansion of Bavarian economic relations. Together we will further strengthen the role of Messe München as an important driver for the Bavarian economy. At the same time, I would like to thank Dieter Reiter for the excellent cooperation. He significantly contributed to ensuring that Messe München is in an outstanding position today.” During Reiter's term of office, Messe München celebrated the opening of the new halls C5/C6 and thus the final completion of the Riem exhibition facility and the Conference Center Nord. Mr. Reiter also enabled the company's involvement in the pioneering Bits & Pretzels Founders' Conference and for Messe München to continue to internationalize its operations through a long-term cooperation with the Brazilian Sobratema association to hold the M&T Expo in Brazil.

The chairmanship of the supervisory board alternates every three years between the two main shareholders of Messe München, the Free State of Bavaria and the City of Munich. Both provide five members each. The 18-member supervisory board is completed by Franz-Xaver Peteranderl and Dr. Manfred Gößl, General Manager of the Chamber of Commerce for Munich and Upper Bavaria, as well as six employee representatives of Messe München. 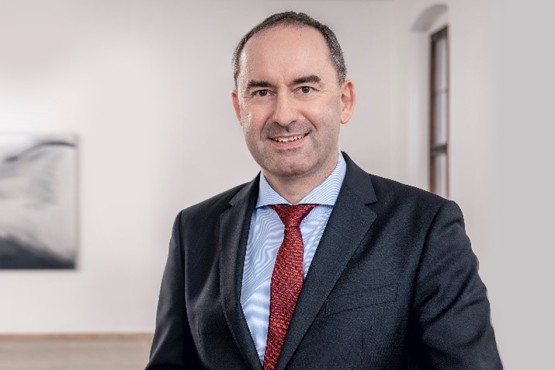