As from January 2020, Messe München is changing over completely to electricity that’s produced purely regeneratively and is thus taking a further step in carbon-neutral action. In recent years, more than half of the company’s electricity requirement was already covered by renewable energy sources. “Now we have changed over to 100 percent, which will result in a further considerable saving of CO2”, explains Klaus Dittrich, Chairman & CEO of Messe München.

Messe München’s average energy requirement at its home location corresponds to that of around 9,100 two-person households in Munich. By changing over completely to regeneratively produced power, Messe München saves about 6,400 tonnes of CO2 per year. The significance of this measure is best explained on the basis of the number of trees necessary to absorb the harmful carbon dioxide from the air. Assuming that it takes about 80 trees to compensate for one tonne of CO2 a year, the future saving at the exhibition center corresponds to the capacity of around 511,500 trees per annum. “These are numbers which make us quite proud”, says a delighted Klaus Dittrich, who elucidates: “As one of the leading trade-fair organizers internationally, Messe München has a strong aura worldwide. In its actions overall as well as at the exhibition center, the company is especially committed to sustainability. By changing over to green electricity, we are taking a further step here in carbon-neutral action.”

The changeover to green electricity is a central measure for more sustainability. Messe München decided on 'M’ green power from the public utility Stadtwerke München; as is clearly verifiable, this electricity is produced exclusively from regenerative energy sources. In the Munich area, these are primarily hydroelectric power stations as well as photovoltaic and geothermal plants. Biogas and wind power still play a fairly minor part at present.

For Messe München, business success and responsible action go together. The company supports environmental and climate protection as well as the conservation of resources. As the first exhibition center in the world, Messe München was awarded the certificate for an ‘Energy-Efficient Enterprise’ by the German organization for technical inspection and control TÜV SÜD. Examples of the company’s high standards of sustainability in operating the exhibition center are the photovoltaic installations on the roofs of the fair, a cogeneration system powered by natural gas and a sophisticated rainwater infiltration system to relieve the load on the drains. Parts of the exhibition center are heated with geothermal energy. Messe München is now already a signatory of the rightandfair sustainability code, whose ten guiding principles focus on sustainability in organizing and carrying out events. 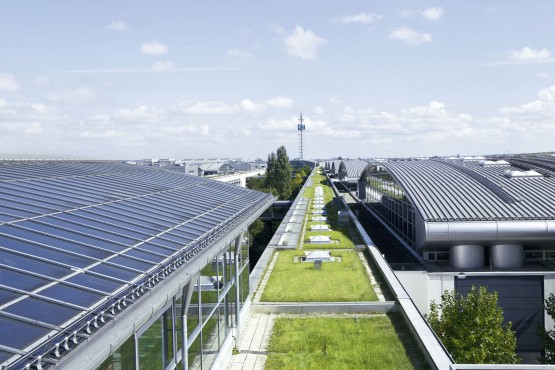