Press release : Twenty years of Messe München in China: transferring its leading shows there a story of success

It all began with the first cut of the spade for a new exhibition center, from which there evolved a story of continuous growth. For 20 years, Messe München has been active in China. “Our company’s business abroad is a success story and China plays a central role in it. Today our business there is of strategic importance. The decision to go to China in November 1999 proved to be far-sighted and absolutely right”, explains Klaus Dittrich, Chairman & CEO of Messe München.

The construction of the exhibition center SNIEC (Shanghai New International Expo Centre) represented the first step in this success story. SNIEC was built and is operated as a joint venture by Messe München together with Messe Düsseldorf, Messe Hannover and the Shanghai Lujiazui Development (Group), one of the largest state property developers and operators in Shanghai. The first cut of the spade was made on November 4, 1999. About two years later on November 2, 2001, the official opening took place. Until the end of 2010, SNIEC was gradually enlarged. Today the exhibition center has 200,000 square meters of hall space and 100,000 square meters of open-air exhibition grounds. In terms of utilization, it is the most successful exhibition center in the world.

Likewise in the year 2001 came the founding of the subsidiary company Messe Muenchen Shanghai Co. Ltd. “The objective then was to comply with our customers’ wishes for high-quality exhibition platforms abroad. Numerous companies had recognized China as a growth market. Messe Muenchen Shanghai was given the task of providing them with a platform there for presentation and networking with the same level of quality as in Munich”, explains Klaus Dittrich.

Milestone in 2002: the first bauma China

Only one year later, Messe München carried out its first transfer of a trade show. bauma—the world-leading fair for construction and mining machinery, in Munich—became an export hit as the first bauma China in 2002. This is now the biggest German trade show abroad. The principle ‘establish it in Germany, transfer it to China’ proved to be the formula for success. In China, Messe München now organizes 14 shows whose original home is Munich.

Apart from bauma, these also include the fair for sports equipment and fashion ISPO; IFAT, the world’s leading trade fair for environmental technology; and electronica, the world’s leading trade fair for electronics. Today this involvement in China is of central importance to Messe München: 30 percent of its sales volume comes from international business, of which China has by far the largest share. Messe Muenchen Shanghai has over 180 members of staff and is thus the biggest subsidiary company. In total, about 300 employees work for Messe München in China. And the most significant purchase as yet in the history of Messe München also took place in China: in 2016, it acquired Fenestration Bau China. For Messe München, this leading trade show for facade elements, windows and doors as well as building materials in China has opened the way into what is currently the biggest construction market in the world.

Klaus Dittrich also sees advantages for the home market through the successful transfer of established brands. “Our own successful trade shows abroad are the best advertisement for our events in the home market. We notice a substantial increase in demand from exhibitors and visitors for the respective show in Munich once we have established a new spin-off abroad. So in 1999, for example, we had 551 visitors and 37 exhibitors from China in Munich; in 2019, it was 9,430 visitors and 1,822 exhibitors. This shows that our involvement abroad directly benefits the home market of Munich. In addition, we can employ the gains from abroad to enlarge our portfolio through purchases and enhance the infrastructure at our home location.” 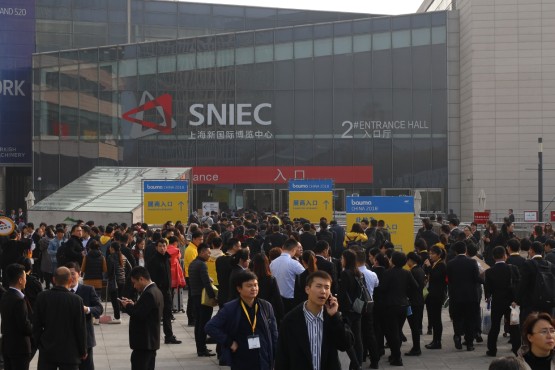