Press release : Messe München: 2018 was a year of digital innovation and sustained growth

Messe München concluded the year 2018 with a record sales volume of EUR 417.9 million. In the first half of 2019 too, new best performances in Munich and abroad highlight the growth trend that has continued for years. With the biggest bauma of all time, the year of 2019 began splendidly for Messe München. Thanks to the good earnings situation, the company can make investments for the future. “We will further extend our strong portfolio in future too and will press ahead with our growth abroad as well as our digitization strategy,” emphasizes Chairman & CEO Klaus Dittrich.

Excellent key figures in a year without bauma

The company generated Group sales of EUR 417.9 million in 2018. Its EBITDA—i.e. earnings before interest, tax, depreciation and amortization—was at EUR 114.2 million. Messe München thus generated the highest volume of sales that was ever attained in a year without bauma.

As well as successfully extending its business abroad, the company is consistently implementing its digital strategy through numerous innovations.

June 2018 saw the premiere of ISPO Digitize Summit, the first digital platform for the sports equipment sector. The focus is on digital solutions for brands and dealers. With Command Control in September 2018, Messe München offered decision-makers a European platform on the subject of cyber security for the first time. digitalBau will extend the world-leading fair BAU in digital terms. In 2020, Messe München will thus be offering a platform for digital transformation for the construction industry too. Last year, Messe München also developed new digital products such as Working Hero, a digital storytelling format for companies.

“2018 was a year of superlatives. It showed that our courage in embracing change, whether by opening up new markets or developing innovative formats, leads to success. Messe München is a driver of innovation—that’s why it is so economically successful,” says Klaus Dittrich.

Business abroad as driver of growth

As the year 2018 showed, the business abroad in particular ensures growth. The international share of Group sales was 30 percent in 2018. Of the company’s own events totaling 42, 14 took place in Munich and 28 abroad. Altogether, Messe München’s trade fairs abroad grew by 8 percent in terms of exhibitors and 11 percent in visitors compared to the previous events respectively.

At a total of 202 events, the company welcomed about 54,500 exhibitors and 2.86 million visitors across the world last year.

Munich as trade-fair location above the market average

At the home location too, exhibitor and visitor numbers grew by double-digit percentages at a number of Messe München’s own events. Thus, for instance, electronica recorded 18 percent more exhibitors than at the previous event, and 12 percent more visitors took part in EXPO REAL than in the previous year. The number of ex-hibitors at IFAT grew by 7 percent. Altogether, more than 1.9 million visitors and 37,698 exhibitors came to the events at the Munich location.

The proportion of participants from abroad—50 percent of the exhibitors and 34 per-cent of visitors—verifies the worldwide attractiveness of Messe München.

The company’s own events at the Munich location developed at considerably above the market average in 2018. Thus the number of exhibitors increased by 4.7 percent in relation to comparable previous events. The overall increase for Germany as a trade-fair location was 2 percent, according to data from AUMA (Association of the German Trade Fair Industry). The number of exhibitors from abroad rose by 8.2 percent (Germany overall: 4.4 percent). In terms of visitor numbers, the company’s own events in Munich gained 2.5 percent (Germany overall: 0.1 percent) and even 5.2 percent as to visitors from abroad.

Successes in 2019 follow on smoothly from the previous year

2019 already started auspiciously; in the first few months of the year, Messe Mün-chen attained peak figures with no decrease in the high level of participation from abroad. BAU registered record numbers at the beginning of 2019. On an exhibition area of 200,000 square meters for the first time, a quarter of a million visitors were welcomed—85,000 of them from abroad. With around 628,000 visitors, bauma achieved a new visitor record. The 258,000 international visitors came from 200 countries of the world.

For transport logistic in June, a considerable increase in exhibitors is becoming apparent. To date, the number has grown by 9 percent; the proportion from abroad is 56 percent.

Asian demand for environmental technologies has taken on new dimensions—this was made clear by IE expo China 2019 in April. Over 73,000 trade visitors informed themselves about the new trends and technologies in water, sewage, waste and raw materials management.

A milestone for the company at the beginning of 2019 was the repayment of the shareholder loans of around EUR 520 million for the construction of the new exhibition center. “This shows the economic strength of Messe München, which will now stand its ground as an independent company in global competition. That we reached 5th place among the highest-grossing exhibition companies worldwide in 2018 makes us very confident,” says Klaus Dittrich.

With a sales volume of EUR 12.5 million in 2018, the ICM – Internationales Congress Center München attained the best result in its 20-year history. The MOC Veranstaltungscenter München finished with sales of EUR 11.3 million. The guest events area generated EUR 49.2 million in sales. With EUR 31.3 million in 2018, the subsidiary company MEPLAN attained the highest sales volume in the firm’s history. 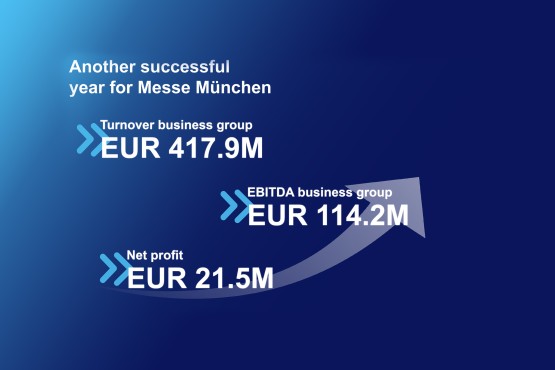